Giordano Ceccotti, since he was a child, has shown a talent and great interest in music. He graduated as a “Master of Arts” at the Istituto Statale “B. Di Betto” in Perugia.

He joined a Medieval music ensemble as a fiddle player and met some of the members of ensemble Micrologus, thus giving birth to a long series of collaborations.
He played in several local groups and in 1998 he founded ensemble Laus Veris, participating in many important Italian and International festivals and historical reconstructions.

He took part in the “27th Rencontres internationales de luthiers et maîtres sonneurs” in Saint Chartier, France, where he attended the hurdy-gurdy workshop with J-F. “Maxou” Heintzen, and then the workshop on French and Occitan violin with Gabriele Ferrero.
He has made instruments since 1999 and at the moment he’s dealing with in-depth iconographic research on musical instruments from 14th and 15th-century central Italy and on other extant ancient instruments, focusing on the materials and the techniques, in order to reproduce them full scale. Particularly, his intense research let him discover an image showing a nyckelharpa from early 15th-century Siena. This image was shown to Swedish musicologist Per-Ulf Allmo, who compared it to other images and stated that it is one of the oldest in Italy and Sweden. Consequently, Giordano and his colleagues gained the praise of the Swedish Institution as well as their approval to create the first International School of Nyckelharpa in Forlimpopoli, led by Master Marco Ambrosini from Oni Wytars.
Giordano Ceccotti can reproduce fiddles, rebecs, lire da braccio, hurdy-gurdies, lutes, psalteries, chitarrini and any type of string instrument from iconography, and carries out his research along with musicians known all over the world.

Moreover, some of his instruments were played in the latest works by ensemble Micrologus, and in other albums by Italian ensembles and foreigner groups (French, Swiss, German, American, Austrian, Canadian groups) and even in the modern field, in “Ho un sogno” by Anna Oxa and “Kronomachia” by Daniele Sepe.
Over the last few years he has devoted himself to making electrical instruments, even solid-body instruments, proposing modern versions of ancient or traditional instruments such as hurdy-gurdies, viols, mandoloncellos, ouds, mandolas, etc.
He has attended many courses, among which Irish violin with master Marco Fabbri from Roma and hurdy-gurdy with Stéphane Durand and Valentin Clastrier, who are two of the best-known musicians in the field of modern and traditional French music.
He obtained the diploma as Mastro liutaio e archettaio (Master lute maker and bow maker) at the School for Master lute makers in Gubbio.
He has attended classes of lira da braccio with Igor Pomykalo.
Among his collaborations are: “BandaAntica La Pifarescha”, Micrologus, Aquila Altera, Centro Studi Adolfo Broegg, where he teaches hurdy-gurdy and symphonia.
He plays the hurdy-gurdy and the violin in a group of traditional French music, “Cantalusa”. 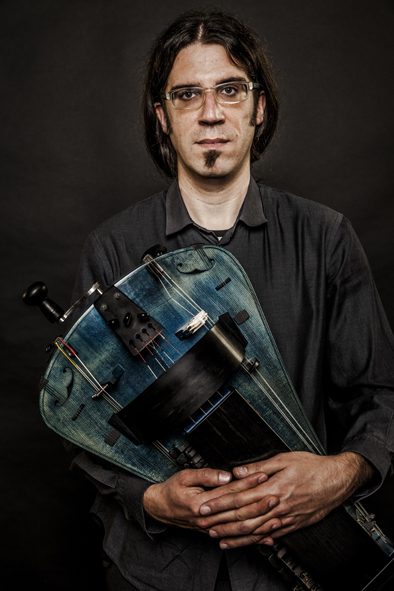 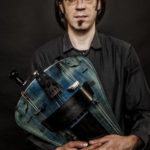