The italian medieval ensemble, Micrologus, led the way in Italy amongst early music groups to a rediscovery of medieval music in performance. They continue to find new pathways of interpretation and performing styles and attract an increasing number of listeners and concert goers both in Italy and across Europe.

Founded in 1984 by Patrizia Bovi, Adolfo Broegg (1961-2006), Goffredo Degli Esposti and Gabriele Russo, in their 27 years of existence they have released 28 CDs, including two winners of the “Diapason d’ Or of the year” (in 1996, for the CD entitled Landini e la musica fiorentina, and in 1999, for Alla napolitana, respectively), an “The Best of 2000 Award” of Goldberg, for the CD Cantico della Terra, and, in 2009, with the CD-Book “Aragòn en Nàpoles”, a “Biggest Surprise” of Boston Globe – Top Classical Albums of the year.

They are regularly invited to play in many of the most important festivals and venues in Europe (Urbino, Montpellier, Wien Konzerthaus, Cité de la Musique in Paris, Southbank Centre, York Early Music Festival, Festival des Flandres) not to mention around the world (Japan, Mexico, Canada, USA). Their work is closely based on their researches into the historical background of the music they play, including work on the oral traditions, giving them a well earned reputation as front runners in historically informed performance. However, key to their success with the public is their exceptionally vivacious, lively and above all, approachable musical style mixing varied instrumental colours with vocal polyphony.

The Ensemble Micrologus also participate in theatre and cinema projects (they are the authors of the soundtrack of the film Mediterraneo, directed by Gabriele Salvatores, Oscar winner in 1992), as well as in dance performances: in 2007-2009, they toured extensively with the Belgian contemporary dance show, Myth, created by choreographer Sidi Larbi Cherkaoui, bringing their creative but informed take on medieval music to an even bigger audience than before.

WEBSITE >>
With our musical instruments, faithful to those of the ancient time, made by specialized manufacturers, we have prepared over 30 different shows, some in theatrical form with sets and costumes, taking them to concerts in Europe, the Americas and Japan. 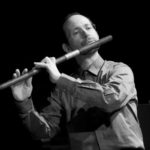